Halloween approaches and the scariest thing is the neighbours

The countdown is on. In mere days, the biggest First World Problem will be at my doorstep. A hundred overfed, me-first middle class children extorting me: give us candy or we egg your house. And I will give them candy. Why? Because, last year, I didn't give them candy. No one egged my house. No one left a flaming bag of dog crap on our doorstep.

But the neighbours disapproved.

We were woefully unprepared when we first moved here.  We expected the traffic of children to be as light as the last townhouse complex we lived in: maybe we would see a couple dozen children. Looking back now, I laugh at my naive former self. What a rube. 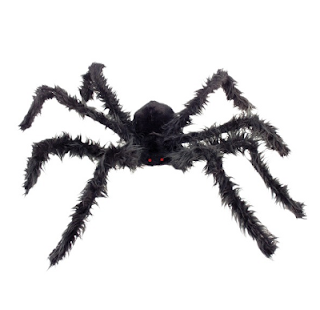 There were signs that we should have been more prepared. Up and down the street, the Halloween decorations were out weeks in advance. Giant inflatable Frankensteins on the porches. Ghoulish skeletons hanging from the branches of trees. One fool even took the opportunity to get the jump on Christmas. He put up Santa on his roof,  speckled  in blood. Zombie Santa. Every day for two weeks, my daughter walked to school, past this psyche-strangling, childhood memory embedding, images-to-relate-to-therapists-much-later spectacle. After a few days of that, Natalie asked me if Santa was evil. This is the actual conversation:

Natalie: Is Santa going come down the chimney and eat my brains?
Me: (sensing that this is a pivotal moment in my child's understanding of our cultural mores and subtleties) Yes.

Halloween is not a spectator sport on my block. It is a full-contact game of Keeping Up With The Joneses. Except the Joneses are undead.  Sensing that, being the new people in the neighborhood, we should try and be part of the norm, my wife went out and bought a giant spider, hung it in our front window, then looked at me  like she had finished painting the Sistine Chapel.

My neighbor, Herb, was unimpressed.

"I see you got a stuffed spider in your window," he told me over the fence.

He looked wistfully in the distance, a solemn expression on his face.  "The Parkers down the street, they got that damned 15 foot tall inflatable Frankenstein out again. Third year in a row." He shook his head. "It just ain't right."

Sensing a chance to bond, I commiserated. "Nothing inflatable at our house," I said, and Herb looked at me with a small bit of disdain.

"Course not," he said. "You got a spider in your front window." And, having pronounced complete judgement on our feeble attempt to decorate, he turned without a word and went inside.

I should have taken this as a warning. But, being partially autistic (self-diagnosed -- the most reliable kind),  by the time I walked back into the kitchen, I had completely forgotten the conversation. There, my wife asked me what we had been talking about.

"He's thinking of getting an inflatable spider," I said.

Of course, he had more than an inflatable spider. When Halloween rolled around, Herb had carved -- get ready for it -- 17 pumpkins. They lined the path to his front door, like an evil gauntlet. Giant cobwebs hung from the eaves. A recorded loop of howling wolves and clanking chains was hooked to a motion sensor and scared the bejeezus out of kids when they arrived at the door.  He had replaced the doorbell chimes with a bloodcurdling scream.

The coup de grace was, when he opened the door, he had an actual three-headed rabid dog chained up in the hall, and from its mouth, actual demons from the fires of hell would charge the children and attempt to steal their souls. I don't know where he got the dog. I didn't even know we had a dog pound nearby.

Beside Herb's house, beside his grand spectacle of Halloweirdness, sat our  house, like a lump of unbuttered mash potato sitting beside Peking Duck. We had a single smiling pumpkin, beneath the window where there hung a stuffed spider from Wal Mart. And when children knocked at our door, it would be opened by either a man ghoulishly dressed like a dad trying to watch the hockey game, or a mom dressed as an overcompensating parent feigning extreme fear at every costume.

On our first Halloweeon on this street, we thought we had brought game. We thought we were ready.

When the first batch of kids arrived, we opened the door full of excitement and joy. And we came face to face with six children.

"It's probably just the early rush," I shrugged. We passed out candy. No sooner had we closed the door, sat down to laugh at the unexpected size of the first group of children, then the door rang again. This time, there were eight kids, with more streaming down our front path.

"That was early rush," I corrected. "Before that, we had the early, early rush."

But then the doorbell rang again, and we opened it to to more kids than we could quickly count. Behind them, we could hear a low buzz, like a hive filled with thousands of children bees, dressed up as wasps and caterpillars, going from comb to comb, looking for honey. The sidewalks were crawling with goblins and ghosts.

We  looked at the street. We looked at our already draining bowl of candy. We looked at each other with a dawning realization. We were on the Titanic, and there weren't enough lifeboats.

We tried to ration the candy: one piece per child. But it was fruitless. And then came the moment: we ran out of candy. Yet, they were still knocking at the door. "What do we do now?" shrieked Joanna, and I rummaged through our pantry. "Kidney beans?" I offered up, half in jest, half hoping that we could finally get rid of the damned things.

That's when Joanna panicked and suddenly turned off all the lights in the house.  There was silence. We turned to each other.

I turned off the porch light. A few moments later, the doorbell rang. I closed the curtains. But still they came. Hands over her ears, my wife slowly slid to the floor, while outside, a scratching at the door continued, and the low muted groaning of voices, muffled by masks, 'Triggerdreat, triggerdreat, triggerdreat ..." 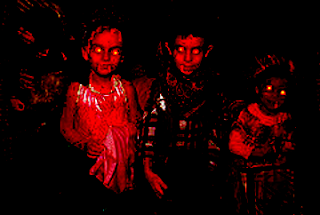 And then I saw it. The flickering light from the eyes of our one Jack O Lantern. It was the pumpkin, on the front porch, calling to all the Trick or Treaters like a siren. I threw Joanna aside and burst through the front door, struggling through the throngs of youngsters, their hands in the air, reaching for me, pulling on me, calling for candy. I waded through them like wading through a hip-deep marsh, as more children arrived. When I reached the pumpkin, with a last effort, pulling up the final reserves of my strength, I lifted it high in the air and, with all my might, threw it off the porch, over the front lawn, over the sidewalk and into the middle of the street where it burst open like a ... well, like a pumpkin that has been thrown onto the pavement.

A mournful groan rose all around me, and the children, the shoulders slumped, their fake tails limp, their fake furry ears drooping, shuffled off of our porch and back into the night. I collapsed to the floor, utterly exhausted. From inside, I heard my wife whispering, "are they gone yet?"

It was then that I looked up and saw, next door, our neighbor Herb, who had been handing out candy. He was frozen in midair, his hand outstretched. The children were also frozen, their grasping hands motionless. They were all staring at me, staring at this weak, contemptible shell of a Halloween host.

Herb shook his head in disgust. He finished handing out the candy. Then, with hardly another glance at me, he turned and went back inside. But as he turned, I heard him mutter, under his breath.