Sisyphus was a parent 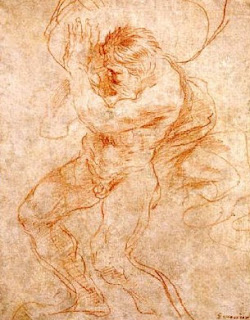 In so many ways, being a dad is like being Sisyphus.

This is not to take away from those who have their own rocks to push. Like those in palliative care, tirelessly caring for the dying. Like those on suicide prevention lines, endlessly counselling those preparing to die. I respect these people.

But I have to pick up toys every day.

Sisyphus was the poor sap in Greek mythology who was always on the go, always doing things. Sort of like your typical mid-level managerial worker be. And it displeased the gods to a point where they could stand no more.

When at last he died and made his way to the underworld, Sisyphus' punishment was simple. Roll a boulder over a hill. The boulder was large, but not so large that he couldn't accomplish the task. The problem was that, every time he neared the summit, the boulder slipped from his grasp and rolled back down to the bottom.

He and I are so alike.

Every day, shoulders bowed, and gait slow and heavy, I pick up each and every toy, and put it back in its place.

When the kids were younger, I picked up each Thomas the Tank Engine piece of track from the floor and reassembled the train yard. I hung up each of Natalie's dressup clothes, and put her figurine animals back in their bag.

Then they began to enjoy puzzles and the task has tripled: I picked up the scattered pieces from several different puzzles, then separate them, putting them back into their own box.

Now that they are older, things haven't changed much. I now pick up different things. Countless pencil crayons and sheafs of paper. Elsa and Anna knick knacks. Books. Comics. Balls. And Lego. Oh god, there's so much Lego to pick up.

I do all this because I have to. If I didn't, the children would come downstairs the next morning, and stand in the middle of the playroom, like stunned survivors in the aftermath of an earthquake. There would be no joy, for the joy comes from creating chaos, not from enduring it.

Natalie and Bennett are never happier than when they are extracting out the order. With every overturned bucket, every overturned box, their smiles grow a little. They talk and prattle and sing small ditties. After a couple of hours, they emerge, spent, satiated, blissfully happy. It's going to be a good day.

Every time Sisyphus got his boulder to the top, he lost his grip and it tumbled back down to the valley flow. And in this way, the gods were appeased. But did the gods actually prevail? Perhaps not. The myth says that each time Sisyphus turned to descend and begin his task anew, he smiled.

I feel you, brother.
Posted by Aaron Cully Drake