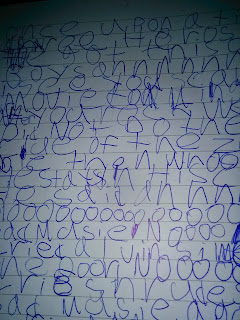 Nat has taken to writing novels. This is totally appropriate. This shouldn't be a surprise to me, because her favorite pastime is to sit on her bed, flipping pages in her dictionary. Studying for some imagined freakish upcoming spelling test from hell, is my guess why.

But she has a writing bug, and it is a little surprising, because she seems happiest when working in fragments. Single words, splices of dialogues she remembers, these are the areas in which she is most comfortable.

Even so, she spends a lot of time writing convoluted whackjob stories that are the devil to read because her world does not include spaces between words. A sample of her prose on the right. Imagine trying to read this. I am a linguistic archeologist, because I have to chip the actual words out of this jumble of thought, this brain dump of notions, this shotcrete of her mind. One single paragraph. 22 pages long.

"Spaces!" I tell her, again and again. "You have to put spaces between your words!"

"Bigger spaces than the spaces between letters!"

"I think you're just blowing smoke at me," I never actually say. Although I should say it, because that's what happens every time. I tell her to use spaces. She nods, she agrees, she ignores.

Go away, Dad, she tells me silently. This is my art, not yours.

Sometimes, however, she sits at the computer and types her story. When she does, she puts spaces between her words. She has fewer of the stops and starts I find in her journals. The sentences seem to flow. Sometimes it can be magical.

Yesterday, she wrote her first novel. It was two pages long, but it was a novel because it had eleven chapters, and it even had a story arc. There are lovers, there are chases. There is Humpty Dumpty. And a beanstalk. I don't know how she keeps project notes in that head of hers, but it's definitely not the Dewey Decimal System.

And yet. And yet.

There is something profoundly sweet about her writing. Something distant, like the movement from the side of your eye, like you may have just glimpsed an apparition, but it turns out to be an oddly shaped tree. You sense there is a deeper meaning in here words, as if her ideas are too big for head, as if the notion she is trying to get across is four dimensional, but has to be flattened down to two dimensions on paper. We only get a snapshot of what she is thinking, but sometimes we can see the larger picture hidden in a fourth dimension, and it's grand.

She writes. When she finishes, she never shows it to anyone. She never presents it to us for praise. She never asks anyone if they want to read her stories.

But she always leaves them in a visible space, there for us to stumble upon.

This is the novel she wrote and  I've read it for the sixth time. The things that hold your interest.

Chapter One. The Greatest Love Story Ever Told

She took off the goggles and helmet.
Her name was Fifi.

(editor's note: oh, this is great. A simple opening chapter. Short. Introduces the main character. Fifi. She has goggles. I love Fifi already)

Chapter Two, The Plane Takes Off

She took off in her plane. A boy named Kevin tried to find the girl who stole Snoopy's heart.
There she was!
(okay, we've got a love interest. I'm not sure who Snoopy is, but this is just a first draft)

(what, wasn't it Fifi's plane to begin with?)
Nooooo, yelled Kevin.
Fifi was gone.
(drama, tension. I suspect it wasn't the actual plane that kidnapped Fifi, and probably someone in the plane. But still, I'm very worried about Fifi now)

Walt Disney presents a Walt Disney production: The Robot And Boy Movie. (wait, what?)
Something ticks. (ooh, tension)
A mouse crawled up the sleeve. (creepy, this is good)
Rocrin screamed ( I don't know who Rocrin is, but he shows up in Nat's stories a lot)
He fell over and passed out. (seriously, I was on the edge of my seat at this point)

Greg fell into the trash.  (Greg? who is Greg??)
Fifi leaped off the plane.
HELP, he screamed.
He fell over and passed out. (Greg may be a drunk)

Fifi saved the screaming kid. (Is that Greg? From the trash?)
You saved him, your a hero! (you're*)
Humpty stepped out of his cell. (who?)
He was happy to see Puss. (is this a flashback? is it relevant to the story?)

Chapter Seven, Never Give Up

Chapter Eight. Manny Can You Hear Me?

Rocrin, get off your brother! (Manny may be Rocrin's brother)
Okay, Fregley. (who is Fregley??) Rocrin slapped him on the mouth, (hard?) yes real hard.
When they were kids, Rockrin got off burst of smoke (I don't know what that means).
Greg (remember Greg? The one that passed out in the trash?) dragged Rocrin from Fregley and punched him in the face.
Fregley, don't worry, do you want to come out?
What is he worrying about?
Patty's gonna kill Greg. (Greg is NOT having a good day)

(Robots?? Pick a plot line!)
Jump. Whoosh!
Snore.
two years later:
Frown. Slam.
Get up!
Stomp. Grab. Sneak. Stand. Grab. Run! Throw!
Gasp!
Sigh, walk, mix, throw (you know what, it gets kind of repetitive here, I think we can skip the next page and a half of onomatopoeia.

tldr; lots of stomping, sneaking, slapping, someone calls someone a stupid bird. Patty - I don't know who Patty is - slaps Rocrin)

Patty ran over to Rocrin (DON'T LEAVE ME HANGING DID PATTY KILL GREG??)
The ghost should have not killed your brother. I'm sorry. (wait, what, when was there a ghost?)

(who are John and Cindy? You know what, never mind, they sound like sweet people)

Okay, so the story seems to end a little abruptly, but at least it has a happy ending. John and Cindy get married, and that's the kind of thing you want to happen after the robots appear, after Patty attempts to kill Greg, after ghosts kill brothers.

I gave her back my annotated critique of her novel. She read it over. Frowned. Read it over again. Slowly looked up at me.

"Okay," she said, and then pushed me out the door.

Artists. They're all primadonnas.